On Mayday 2016 the CPGB-ML is proud to send a message of international solidarity to workers of all countries struggling against capitalist imperialism, and to stand with Palestine!

Meanwhile Corbyn, and the isolated leadership of Labour find themselves in fierce ideological combat, both inside of their party and with the wider media and political establishment. The Labour Party leadership is being bullied by the Zionist Lobby and the imperialist establishment into expressly giving up any support of Palestine and mouthing support for Israel.

Picture from the Daily Telegraph, Monday 2 May 2016

Jeremy Corbyn addressed the crowd at Clerkenwell Green on Sunday – the first Labour leader to do so in 50 years – apparently solely to address the media furore around perceived anti-semitism within the Labour party which has seen Naz Shah MP and Ken Livingstone suspended.

Desperate to preserve their electability, not a single mention of the genocide of Palestinians was to be heard, despite Corbyn and ‘left labour’ long claiming ardent support of the Palestinian cause, and dominating the agenda of the Palestine Solidarity movement in Britain (and limiting it to parliamentary forums as far as possible), among other anti-imperialist struggles, notably “Stop the War”. All principle must be sacrificed before the bourgeois media and establishment pressure: conform or we will sabotage your chances of electoral success.

His reward was (perhaps predictably) to be accused of “keeping controversial company” by appearing in the street with flag bearing communists. Again, an easy enough point to defend, surely Jeremy? We all appear in the street every day with people we disagree with? Or perhaps hit back by asserting our ‘democratic right’ to uphold our communist beliefs? 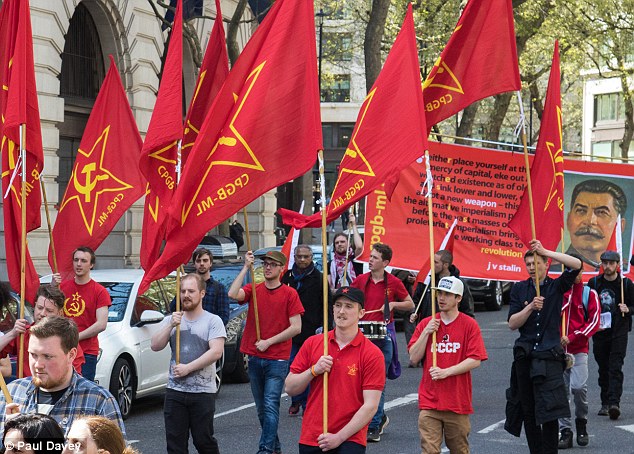 But this is apparently all too much to bear – a fact that the fake left will no doubt try and hold against our party, keen as they are to protect Corbyn’s electoral fortunes as they see them, even to the point of discarding all scruple and remaining shreds of ‘principle’.

In our opinion, the worst company Corbyn keeps is when he enters the palace of Westminster!

Corbyn seems to believe that if only he can somehow come to office – by hook or by crook – then all these questions can be ‘sorted out’ or ‘smuggled in’ later; so evasive and meaningless speeches about ‘respecting diverse origins’ is the message, rather than one of opposing the imperialist sponsored genocide perpetrated by Israeli Zionism against the Palestinian people, and the wars of plunder being fought by Imperialism (in the Ukraine, in Syria, and world-wide). To the Credit of Livingstone, he has at least refused to apologise for repeating historical truths: that the Zionists did indeed make a pact with the Hitlerite Fascists to transfer the Jewish population of Europe to Israel.

This video gives some mayday footage of our own, as well as a Sky News report. Its clear the imperialist press and establishment seek to destabilise Corbyn by claiming some association with the CPGB-ML – to cause them some electoral embarrassment, and oust Corbyn and McDonnell at the earliest opportunity. This link is tenuous in the extreme, by anyones reckoning. In doing so they have broken the media blackout that they usually enforce against our party, the CPGB-ML. This may yet prove a serious miscalculation for the British Bourgeoisie.

Labour Party Social democracy (Under McDonald, Atlee, Callaghan, Foot, Kinnock, Smith, Blair, Brown, Miliband, or Corbyn) has been an integral part of British imperialism’s mechanism of control of the British working class since it became a parliamentary force. Labour has spared no efforts to prove its loyalty to the Empire.

Yet incredibly, Labour continues to set out its stall as being the “party of the working class”, supported by many Left wing grouplets in this deceit – regardless of all evidence to the contrary. This is the secret of Corbyn’s hollow words and stance on all questions of importance, from Trident, the EU, TTIP or the NHS – let alone curtailing the rights of finance capital to exploit workers of Britain and the World. 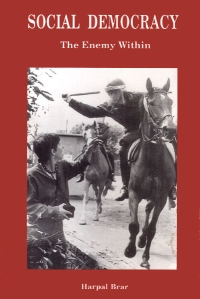 It is hard, sometimes, to understand the extent to which Corbyn believes he is capable of bringing any change to the rapacious establishment, the real rulers of the country, the finance capitalists and industrialists, that his party has faithfully served for 100 years.

He is part of a tradition of making things a bit better for workers IN ORDER TO PRESERVE capitalist imperialism – with all its exploitation, poverty, injustice, colonial oppression and war, environmental devastation and systemic violence and inequality – at all costs. But in times of crisis, even this is too much for the capitalists; until they are faced with the spectre of serious revolution.

This then, is the reason that Corbyn has shown a remarkable inability to take the battle to the enemy’s camp. The CPGB-ML, on the other hand, are ready, willing and able to do so. The CPGB-ML is not afraid to speak the truth – we know it is the only road to freedom that the Working class can aspire to. Join us!

Subscribe! Donate! Join us in building a bright future for humanity!