At the invitation of the Peoples Liberation Front – Sri Lanka (JVP), the Communist Party of Great Britain (Marxist-Leninist) sent comrade Sammi Ibrahem to give a message of solidarity to the May 1st demonstrations in Jaffna and Colombo.

The CPGB-ML has a good working relationship with the JVP in Britain. It is the opinion of the CPGB-ML that all workers who reside in Britain constitute a part of the British working class, regardless of how long they have been in the country or how long they intend to remain. Whilst working in Britain it is incumbent upon revolutionaries and those who call themselves communist to be active in the revolutionary movement of the country they are resident in. For that reason, members of the JVP fulfil their internationalist duty as supporters and members of the CPGB-ML. They set an example to many others who for sectarian reasons continue to back the revisionists and their support for the imperialist Labour Party.

As the rot sets in ever deeper for the revisionists, it will come to pass that all sincere communists who reside in Britain, regardless of the affiliations which their organisations back home may have with aging revisionist groups here, will be faced with the choice of either undertaking no communist work, or working with the CPGB-ML. As the Trotskyites liquidate their organisations to infiltrate Labour, and the revisionists quietly fulfil the logic of their own discredited programmes of self-annihilation, only the CPGB-ML has an independent programme for the growth and development of a truly Marxist-Leninist organisation in Britain.

In Sri Lanka comrade Sammi addressed JVP rallies in both Jaffna and Colombo, along with international communist guests from PAME & the Communist Parties of Greece and Cuba. We reproduce below Sammi’s greeting to the May 1st rally in Colombo along with a few photographs of the inspiring work of the JVP this May Day 2017. 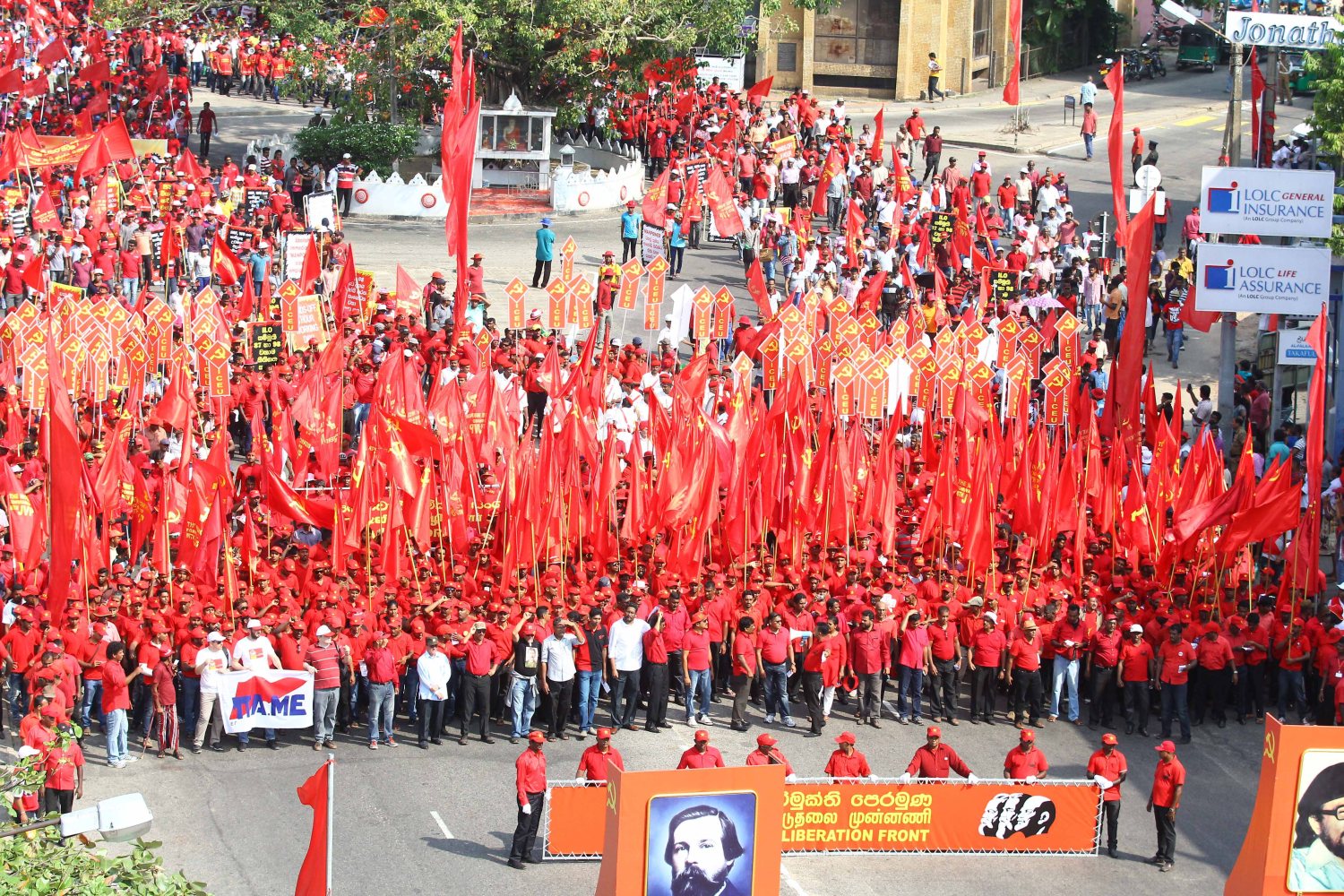 Message of Greetings from CPGB-ML to JVP May 1st Rally

I bring greetings from the Communist Party of Great Britain (Marxist-Leninist) – Happy 1st May!

Our Party is extremely proud to have good relations with the JVP – Peoples Liberation Front, and we can see from the banners today that the struggle against imperialism and for socialism is being waged by the comrades of the Peoples Liberation Front. Comrades, workers in Britain have a lot to learn from your example.  Red Salute to the JVP!

Comrades, the billionaires who control the world keep the masses in abject poverty. In the oppressed and economically backward countries the conditions for the working classes are especially hard. Value is created by human labour, but that which is produced through the blood and sweat of Sri Lankan workers is stolen by Sri Lankan capitalists and their friends, the imperialists, who channel billions back into their own pockets. Workers can only improve their lot through class struggle. There is nothing so hypocritical than the bourgeois class who assert the equality of rich and poor, the well fed and the hungry. Capitalism drives the workers to sell their labour power to the capitalist, workers have no other choice but wage slavery under capitalist conditions. The workers in Sri Lanka struggle bravely for a dignified life and set a great example to the working class of Britain, but struggle must be for socialism, for a revolutionary change. Leninism teaches that we cannot do this without leadership by genuine socialists, the Sri Lankan workers are fortunate to have the JVP leading them in their struggle.

Any proletarian Party which hopes to take state power and build socialism must understand how to adapt, how to change their method of struggle whilst continuing to advance on the road to Socialism. Sometimes it is necessary to fight with your fists and the Sri Lankan workers have heroic chapters written into their history when they were led in fearless armed struggle. As Marxists we understand that state power means more than capturing the parliamentary power, but when legal methods of struggle are open to revolutionaries, they must exploit them as best they can. The six members of the JVP inside the Sri Lankan parliament have won this opportunity to demonstrate to the masses the corruption of the ruling parties and can make use of the platform of parliament to inspire the people to make socialism their goal. Rather than claim that the JVP has “sold-out” because it stands in the election we sincerely hope that the JVP can build on the success of the 2015 Parliamentary elections whilst building up the struggle of the masses in the cause of socialism!

In Britain our struggle for socialism has been greatly retarded by the influence of Trotskyites and revisionists who work in the service of our ruling class. They are always quick to cry that revolutionaries have “sold out”. In Sri Lanka you are also cursed by the presence of Trotskyists who speak in revolutionary language to hide from the workers their counter-revolutionary aims. Trotskyists are everywhere the same, counter-revolution is in their blood. We must combat all attempts by Trotskyists to split the ranks of the revolutionary workers in Sri Lanka just as we must fight them at home in Britain. We must fight all attempts by enemies to split and damage the JVP whose historic mission it is to bring about the socialist revolution and the dictatorship of the proletariat.

Today 100 years after the Great October Socialist Revolution in Russia, the example of the Bolsheviks is as valid as ever, the best weapon we have is the science of Marxism-Leninism, the teachings of Marx, Engels, Lenin and Stalin. This is the best defence against Trotskyists and splitters, and it is the blue print for making socialist revolution.

Long live the 1st of May!